Glance Pay is the mobile payments app that’s free to download, easy to use, and designed to save you time and stress by streamlining how you pay your bill in restaurants, retail outlets, and with merchants of all stripes. Backed by state-of-the-art security technology, and equipped with automatic rewards customers love, hundreds of businesses across North America are signing up with Glance Pay to keep their clients happy and their businesses ahead of the pack. What's new? Glance Pay niche market is restaurants and bars where consumers can pay the bill without a machine. Glance offers a lower interest rates, making it a cheap option for restaurant owners and a quick way to pay for users, everybody wins.

Glance has its own payment and POS system for restaurants and users, but has not included a feature to order food from the App. As a restaurant payment solution, adding the ability to order food directly within Glance Pay will remove additional steps and the need for separate apps for our users to order food on the go or from the restaurant’s table.

The Research lasted for two weeks. Before it, the Project Manager and myself created a Product Canvas to summarize and note important key metrics. Here you can find the Problem Statement and Assumptions against other important metrics. This is how it looks. 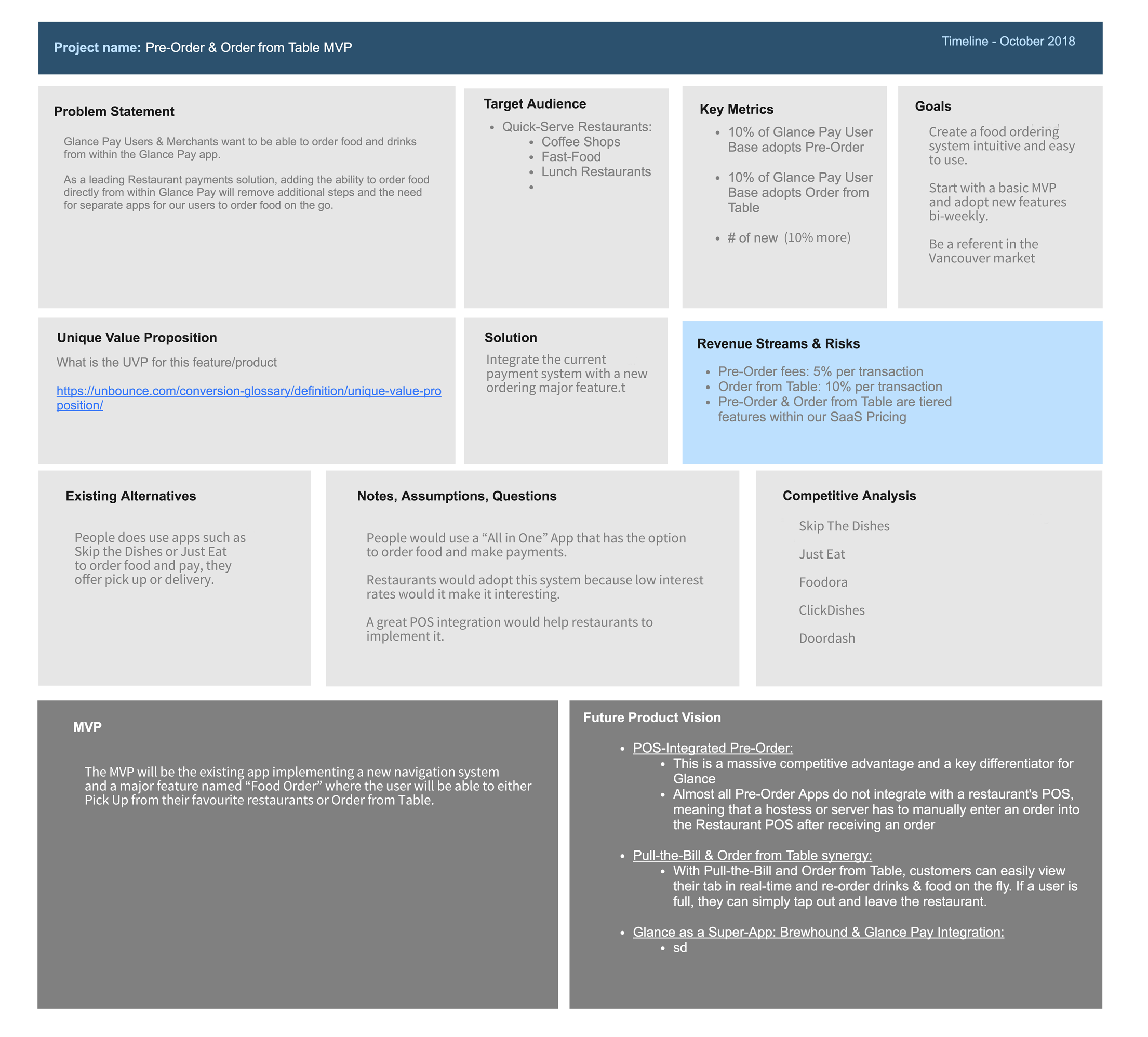 I did completed a comprehensive competitive analysis to six major well known brands that operates in Canada. I included Doordash, Foodora, Skip The Dishes, Uber, Click Dishes. As a high level state the user interacts with the apps in three stages:

After analyzing the data, the UX team got lots of insights and trends of repeating patterns throughout this famous apps: 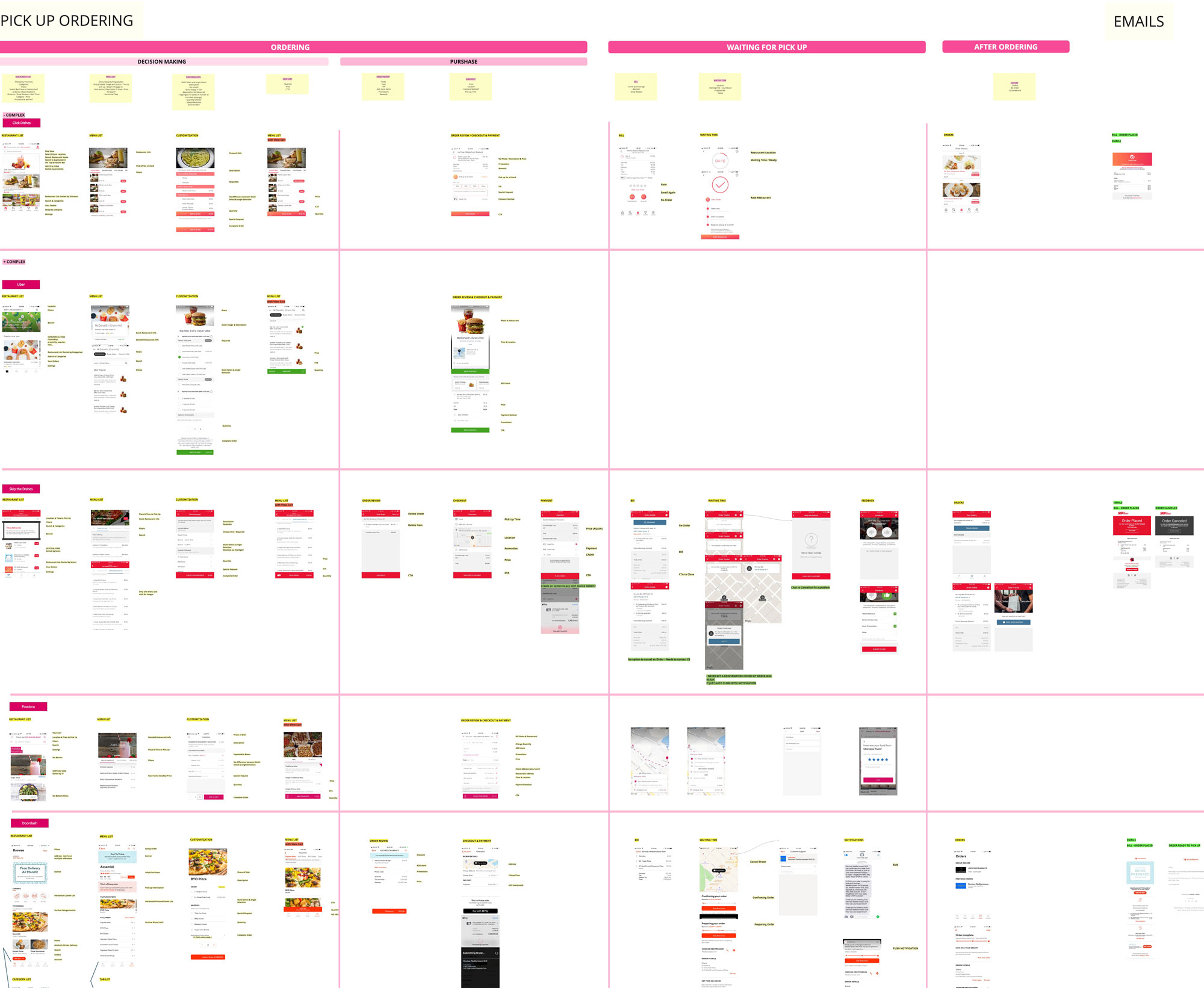 The UX team conducted a User Survey to 30 internal and external individuals to get more subjective outcomes of how users interact with Food Ordering Apps. We wanted to know the behaviour and preferences of them while using this Apps. The data we got is qualitative and quantitative. We included questions like:

The learnings from this data was pretty important for the team to follow up with the design. Important metrics were: 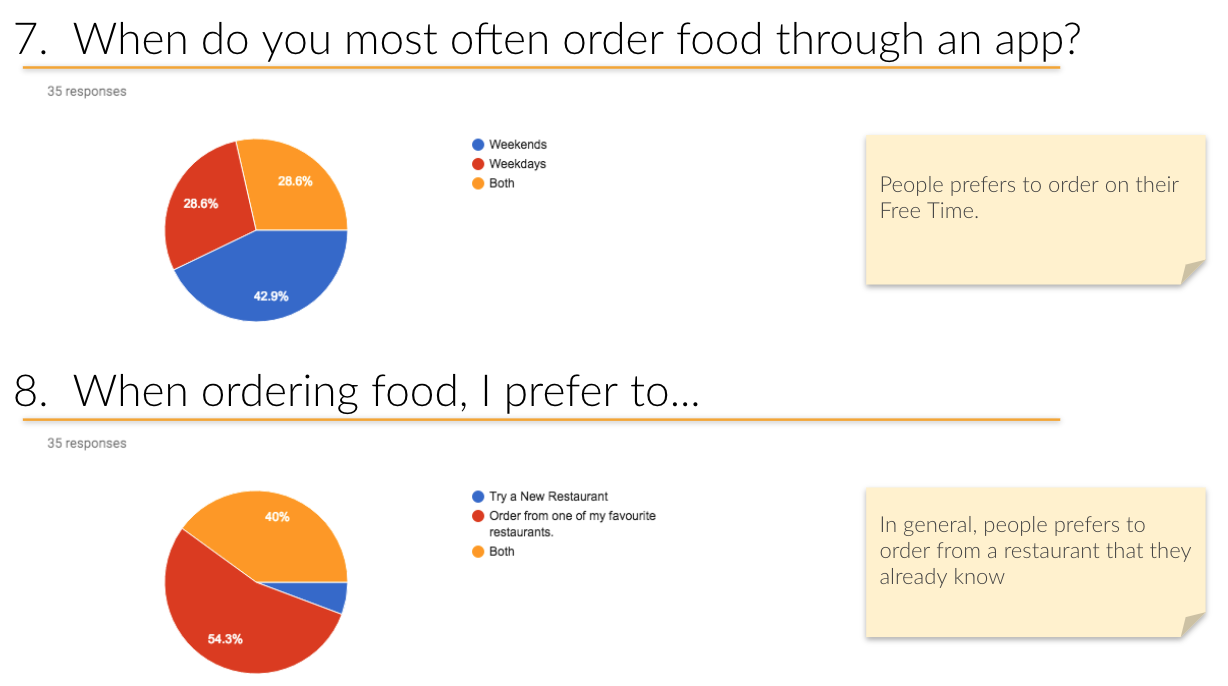 We believe having a mobile app that integrates mobile payments with the function to order food will be useful by millenials to increase their satisfaction when pre-ordering from home or a restaurant’s table. This will lead to more transactions, an increase on 10% in the following six months, and will add a 10% more of downloads after three month of the product release.

The MVP will be the existing app implementing a new navigation system and a major feature named “Food Order” where the user will be able to either Pick Up from their favourite restaurants or Order from Table. The iOS squad will work with six different sprints of two weeks each to create parts of the feature within this time.

After all the Research it was time to put into practice all the learnings and I start creating a User Journey for MVP and two more experimental journeys for the feature. Here I dissected the problem in different parts like different puzzle pieces. Meet Mark, a fictional character that is planning to go to the beach but wants to order food from home to pick up after on his way to the beach. The task is initiated by Mark, he uses a phone to order food, a server will prepare it and will interact with Mark to complete the task. The server will close the order on the restaurant POS and Mark will be notified as the order is COMPLETED and Ready to pick up.

At this stage I started organizing the content of the new app, a major change was that we had to implement a new bottom bar menu. The company wanted to minimize the changes on the App architecture but we had to make some changes on the original flow in order to implement the new feature. Here you have some examples of the sketches we created for both flows, Order from Table and Pick Up. Another consideration we had before designing this flows was if the user was ordering from home or from the restaurant with an in-site beacon that had localized the user, avoiding the need from the user to choose a restaurant from a list. 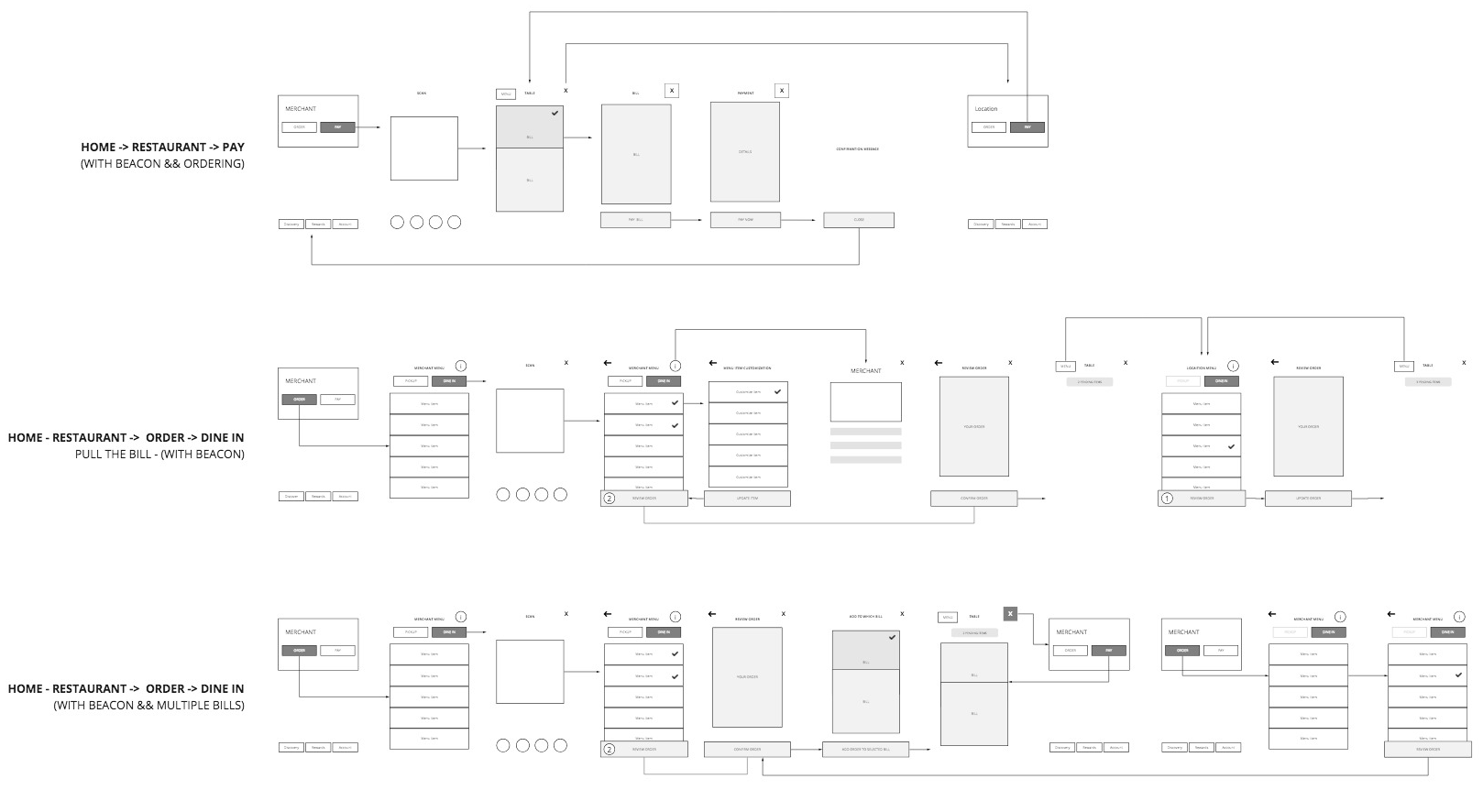 It took some back and forth to organize the information and the potential flows. The final say was an agreement between Project Management, Design, the CEO and the CTO. The tools I used to create the Hi-fi prototypes were Sketch and Invision.

Note: This are medium fi prototypes, well defined but with no colors. The UI designer will work to create a final look according to the company's branding.

After creating the user flows and sketches, I concentrated testing for pain points and usability issues. I facilitated three rounds of usability testing with three to four users each round. I used the data to drive change in each of the three interactions of our design. I found three main issues that I addressed before creating prototypes.

The conception process took over a month before we got the green light to start working with the iOS development team to start building the new feature. The MVP will be build with different sprints during the next months. QA will be involved to test and Design will give approval to each phase. Afterwards we will be able to measure all the KPIs we defined in our hypothesis and do further testing. We will see if this new major feature helps Glance Pay to grow its revenue and visibility in Canada. Thank you for reading!